I recently did a guide on budget microphones, and discovered that there's a really wide range of great and affordable microphones out there for any producer's needs.

So I thought I'd follow that piece up with a guide on recording vocals, so if anyone has a new microphone and they're looking for the next steps, this will be a good a nd comprehensive guide on how to properly record vocals.

So, we'll be covering the fundamentals of how recording vocals is so important, and there are tricks nad techniques to help you get it right.

After all, the vocals will tend to be at the forefront of a mix, so it's important to get them sounding as good as possible.

So let's dive right in. The most important thing about recording, and this doesn't just apply to vocals, is to aim to get the best and cleanest recording at the source. This way, the theory goes, you'll only need to do minimal processing inside your DAW.

So, the opposite is also true. If you have a really awful recording, no amount of DAW magic can make it anything other than what it is at the source.

So, the key piece of advice for a beginner recording vocals is to get the cleanest, clearest and best vocal recording you can get.

So let's move onto some tips.

Whether you're the vocalist as well as the producer, or whether you've got a vocalist coming in to record a vocal line, one of the most important things is that they're warmed up. Like any other type of exercise, you wouldn't go into it straight away without warming up.

So rehearse, and warm up and this will help getting the vocalist comfortable. It's also worth taking some time to think about the environment you're recording in; more people will mean more distractions for the vocalist, so if possible only have the performer and the producer in the room.

Another hugely beneficial element of recording vocals is a good headphone mix. This is what the vocalist is hearing to record her take over, so it needs to sound good. Also, giving a little reverb (even if you're not planning on using it in the finished track) will help a vocalist perform more confidently.

I can't stress enough how important a good headphone mix is; it can really help elevate a performance.

The recording environment is crucial. As we said earlier, you want to aim to get the best possible recording straightaway, and ensuring you're doing it in the right environment can go a long way towards helping this. 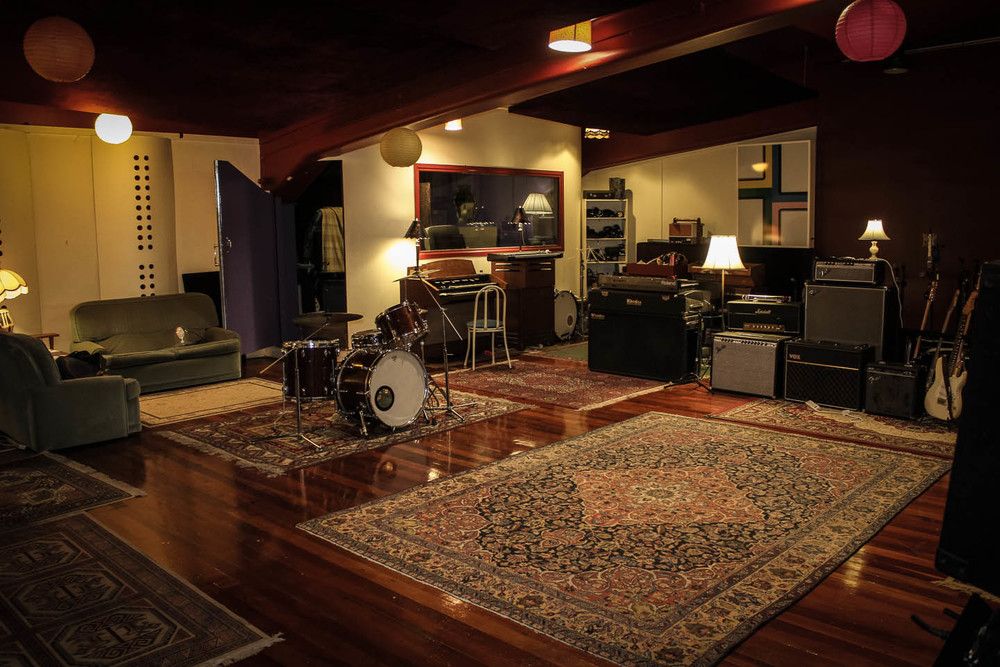 A vocal recording environment needs to be specially considered to get the best out of a recording.

Above is an image of a typical live room in a studio. You can image the results of recording vocals in there; reverberations bouncing off every surface, which would muddy up your vocal take and make mixing it a nightmare.

Consider one of the first effects you put onto vocals; Compression. This will enhance and exaggerate any detrimental effects present in a recording from a poor environment.

Applying reverb will also enhance this muddyness and lack of clarity which can come from a bright and open space.

So, how can you tackle this?

Recording in as sonically dead an environment as possible. The aim of the game is to reduce the amount of room reflections going back into the microphone. You only want the pure singer's voice.

So, if you have a recording booth, with all of the acousitc foam panelling, great. If not, you can improvise screens with sleeping bags, blankets, duvets and other soft furnishings. You want these behind and to the side of your singer.

Another hugely important part of recording vocals is getting the mic placement right.

99% of the time, you want your microphone on a stand. You should only consider letting the singer hold the microphone if their performance depends on it. But ideally, your mic needs to be static.

You also should consider using a pop filter to help reduce plosives. These are the puffs of air pressure that come from our mouth when we say words with hard consonants, as well as sibilance, which is when we say S and T sounds. A pop filter can help reduce these.

There's also the singer themselves to consider.

A well experienced singer will have good mic technique; they will know to move slightly closer to the mic on quieter and softer parts of their performance, and slightly further away on louder and more powerful sections of the song. Ideally, you want your singer around 15-24cm away from your microphone, as this will allow the voice to 'develop' its sound instead of coming right into the microphone.

You'll also need to take the proximity effect into account, which is a phenomenon which leads to an increase in low frequency response as a sound source is moved closer to the microphone.

As we mentioned earlier, giving the vocalist some reverb in their headphone mix can help coax out a better performance. However, you want to make sure you're recording your vocals dry and applying effects after the fact.

You can always add anything you want to a totally dry recording, but you can't take away reverb or other effects if it's recorded onto the take.

When you do come to use reverb though, be sure to only use what you need. Using too much reverb can cause mix issues in your track later on, so make sure you use an amount that's appropriate.

In general, busier songs requier shorter reverb tails and less reverb, while a slower more ballad like song can get away with using more reverb.

You'll also want to consider compression. If a vocalist is recording against the controlled dynamics of a mix, they can sound a bit flat and uneven. So, applying a slight amount of compression to the incoming vocals can help.

I'd always recommend using less compression than you think you're going to need, and make sure to use one that's pretty transparent and neutral sounding. You should aim to have around 5-8dB of gain reduction on the loudest signal peaks, and it's worth using the Auto mode if your compressor has one.

Once you've got your vocals recorded, you can then go on and add some more compression. Trying heavy and subtle compression to see which works best is a good thing to do. However, if you end up using heavy compression, you'll want to use a Noise Gate too, which can help prevent any noise build-up in the pauses of your vocal take.

You can also begin using Compressors which have a specific character to them when you're mixing, as using one of these can give all sorts of larger than life qualities to your vocals.

Now, we also mentioned Noise Gates. While these can be a good effect to use post-recording, you want to avoid using one while you're recording the vocals.

A badly set up Gate can ruin a vocal take. You also want to make sure that you use it before any compression, but don't do it to such an extent that you can't hear the breaths in the recording, as these are a key part of the dynamics of a performance. Often, removing the breath can make a performance sound very robotic.

Another common effect used on vocals is Delay. A good trick for using delay on your vocals is to make sure you try to get them in time with the tempo of the track. You can do this either by calculating the delay needed to match the tempo, or by using a tap-tempo feature if your delay unit has one. Locking in this delay with the rhythms of the track can help tie your mix together.

So, hopefully with this guide you've got some solid tips about recording vocals.

It's a tricky thing to nail, but as long you keep experimenting you'll get good results. Bear in mind that you only need super clean and tight studio quality vocals if that's the sound you're going for.

A lot of musicians make use of lo-fi and 'messy' sounding recordings, where you can hear background noise and other things within the vocals.

While you're here though, why not check out some of our Ableton Live Project Templates? With these you can dive into the nitty gritty detail of a track, and find out the inner workings of what makes a professional level recording tick. We have a dedicated team of international producers who are always working to recreate EDM chart toppers with near perfect accuracy, so go ahead and check out a few with vocals in, to see how they're treated in the DAW environment.

Thanks for checking in with us here at Top Music Arts, and be sure to keep coming back for more guides and resources on music production and recording!