Times are tough across the globe right now. We have a cost of living crisis, energy and fuel prices are insanely high, and if you're anything like me, this crazy time we live in can make you want to be more creative, whether it's a form of expression or escapism. But it's never been more evident how expensive some of the tools of the music production trade can actually be, now that everyone is having to tighten their purse strings and really look at their spending habits.

If this sounds like a familiar predicament to you, and you're looking to get your hands on some new music making software without having to spend your hard earned cash on it, then look no further. We've got you covered.

In this article we are going to look at some of the best free pieces of music software available right now.

So let's get started.

This one is a really recent discovery for me, but I absolutely love it. Spitfire Audio is a fantastic company that makes great software synths, and LABS is their 'infinite series of FREE software instruments'.

It's a collection of free instruments which is compatible with all DAWs. Let's have a look at it. The interface is really nice and simple, and you have four basic controls.

The two sliders to the left are Expression and Dynamics. Adjusting these changes the timbre of the sound you're working with (More on these sounds shortly).

To the right, there's the wheel interface, which I love using because it's so intuitive. The button in the middle of this brings up a series of patch-specific controls. On the one I have selected you can see it is :

Once you've selected one of these controls, the ring control circling the button adjusts the parameter.

It's a relatively simple interface with fewer controls than you might see on other softwares, but remember that this is free.

What makes LABS great, however, is the library of sounds available.

You can see in the image below a screenshot from their website. There are a total of 49 instruments available for LABS, each of which is unique and comes with a selection of sounds within the instrument.

The categories are marked at the top, and it gives you an idea of the wide array of sounds available. From Experimental to Woodwind, Orchestras to Esoteric, there is a vast library of instruments to choose from. Did I mention it was free? You can download and install these through Spitfire Audio's dedicated software which acts as a sort of hub for all of your LABs instruments. Then, once you're in your DAW of choice you can load them up from the browser menu in the top, which you can see pictured below. This is a really fantastic collection of instruments, and they're mostly sampled based so they're great if you're wanting to inject some organic instrument sounds into your productions.

They come with a range of sounds within each instrument, varying from a simple recorded version of the sampled instrument to more experimental sounds it can make.

Luckily, you can grab it on both Windows and MacOS, and it's compatible with all DAWs, so check it out!

Lo-fi music is certainly having a bit of a resurgence in recent years, just look at the hours upon hours of Chill Lofi Beats to Study and Concentrate To on YouTube and you'll see what I mean. Similarly to how Vinyl and cassette have made a huge resurgence since streaming took the physical aspect of music consumerism away, there's been no shortage of Tape Emulation plug-ins to give your music that lovely crunchy sound. As you can see in the image above, SuperflyDSP's Lost-Tapes has a nice simple interface, and only a handful of controls. We have Depth and Rate Knobs, as well as a Noise slider and a Crunch button. Along  the bottom there is a Stereo toggle, as well as Mix slider and an Artifact slider. We also have options to choose between Broken, Lost-Tape, Old-Tape and New. Each of these change the overall timbre of the tape effect accordingly.

This simple collection of controls come together to give a really satisfying and lovely sounding Tape emulator. The warmth is really nice, and the controls are there to let you fine tune the sound to your liking.

Valhalla make incredible plugins. I've been using Shimmer for a long time, and the lush textures available through that plugin are great to play with.

Super Massive is Valhalla's free plugin. It's been designed to allow you to create MASSIVE (get it) reverb and delays. You're going to be able to create some really cool textures with it. As you can see in the image above, there are a tonne of controls to mess around with, and various Mode and Preset options. In the dropdown menu there are options for Echoes, Mod, Reverbs and SFX.

Here is a rundown of how the various reverb/delay modes work:

There is truly a whole host of controls and sounds to experiment with in Super Massive, so throw it on various things to see how it could fit into your music.

You might want to skip over this one if you're not an Ableton user, or maybe not, because it's a good pointer as to why Ableton Live is so loved!

Ableton has a tonne of extra content on their website, some of it paid and some of it free. There are individual instruments, as well as resources bundled into packs. This is one such pack, called Mood Reel Mood Reel is a collection of sounds aimed at making music with a narrative feel. It has contributions from various sound designers, and it strikes a balance between delicate and dramatic sounds to get you in the creative space for making moody music.

I think it's always a great idea to get hold of things that might switch up your way of approaching production. As electronic music producers, it's often easy to fall into our groove, so ensuring we branch out from time to time and work in things that are outside of our usual go-to tools is really important.

This pack is a really great example of that, as it contains many different elements, from instrument racks to samples, all designed to invoke different spaces and settings. There are vast cinematic pad sounds, close intimate vocal recordings, and even an acoustic guitar used as percussion.

All in all, Mood Reel contains the following:

So as you can see, there's a whole host of things to dig into, so this is a great pack for Ableton users to explore!

Compression can seem like such a run of the mill task that it's easy to just get used to your stock DAW compressor and move on. However different software compressors, much like the generation of hardware compressors before them, can add their own unique sonic characteristics onto your sounds. Luckily for you, we have a good free compressor plugin to recommend!

With its sleek interface and easy to use  controls, Roughrider 3 is a solid addition to any producer's arsenal of dynamics plugins. This just happens to be one the most downloaded dynamics plugins of all time, too, so you know you're getting a good one.

It's been available for over a decade, and is now in its third iteration, which comes with all new sidechain options. There's also improved metering and a new 'full bandwidth' button, which allows you to turn off the analogue-style 'warming' effect. But this can be nice to leave on!

This one isn't technically free; you can try it free for 30 days and then it becomes a paid subscription service for £9/$10 per month, but it gets an honorary mention here because it's such a great product!

Offering a novel way to get inspired and work with musical ideas, Arcade is a unique and powerful tool. There are practically endless options when it comes to sounds, and it can be a great tool for breaking writer's block or finding new inspiration and sounds to work with.

It's focused on creativity and play, which are two things that can often get lost in the more complex details of creating electronic music. Let's explore it. 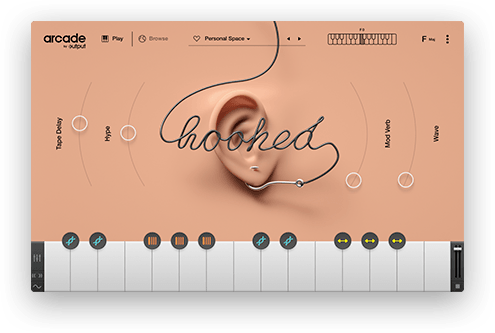 Arcade is described as 'The world's ultimate Sample Playground for your DAW'. Now far from being a catchy tagline, this is a rather spot on description of  what Arcade is.  What makes Arcade so unique is that it's constantly receiving new content via its on board cloud-based browser. Being a sample based 'inspiration machine', it works with different patches and contains beautifully crafted sounds. You can even bring in your own loops and samples to create sounds, and use the onboard editing features to really get things flowing. 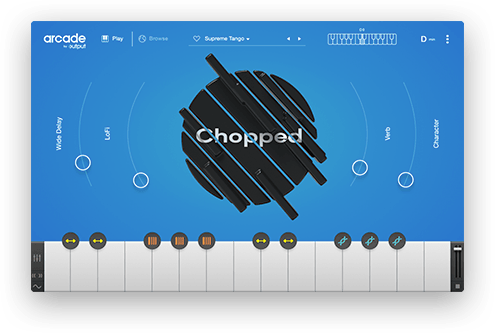 Arcade is a collection of different sample based instruments, not too dissimilar from Spitfire Audio's LABS we discussed earlier in this article. As you can see from the images above, the interface is slick and nice to look at, and each patch has its own unique look. But hidden beneath the surface is a collection of powerful editing and customisation features.

Here are its top features:

The final addition to this list is an upcoming one, but it's a goodie.

The Soft Limit feature has been present in Apogee converters since way back in 1991, when the AD-500 was released - Apogee's first standalone converter.

Now, the Soft Limit is being released as its own free plugin. It's a simple but highly effective processor, which works to emulate the lovely nostalgic sound of tape. It adds the analogue style harmonics and subtle warmth, by rounding our your audio's transients, increasing the perceived loudness of your track, and taming some of the bigger digital peaks.

It will be available later this month, and you can sign up to get an alert for its availability on the Apogee website.

As we said in the beginning of this article, times are tough right now. There are a lot of things happening to make daily living more expensive for the average people like you and me.

And far from an exhaustive list, this was a collection of some of my favourite free options to expand your music making process. These are some of the plugins I've found myself reaching for most often in recent weeks, so I wanted to pass on the tips to you!

Remember, there are hundreds and hundreds of free plugins available, so searching online will often lead you to some nice hidden gems, but if you don't have the time, hopefully this article helped you find a bit of inspiration. Let us know in the comments if you have any favourite free plugins that we didn't mention here!

As always, thanks for checking in with us, and be sure to check out some of our deals on project templates, which are a great way to learn how the pros put together a hit track.